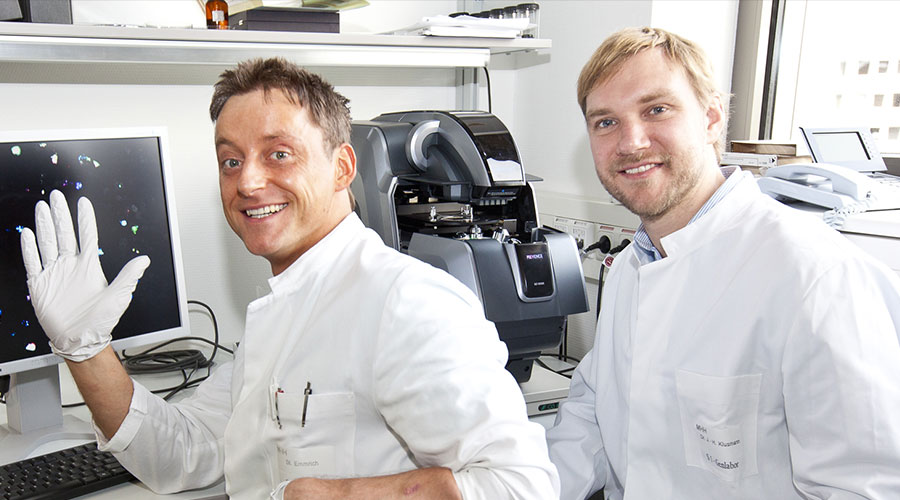 The research group of Dr. Jan-Henning Klusmann, from the Department of Pediatric Hematology and Oncology at the Hannover Medical School (MHH), are investigating how leukemia (blood cancer) develops in order to develop better therapies against this disease. They focus, among other things, on the functions of several microRNAs during normal and cancerous blood formation. “We already knew that these microRNAs play a crucial role in the development of mature blood cells from stem cells – and that many of them are located together in the genome as a cluster. But, it was unclear until now how they jointly control the formation of blood cells”, says the first author of the manuscript Dr. rer. nat. Stephan Emmrich.

In the manuscript, the researchers show that three microRNAs (miR-99a, let-7c and miR-125b) from a cluster on chromosome 21 are highly enriched in acute megakaryoblastic leukemias. The individual microRNAs are mutually reinforcing in their functions – their combined effect exceeds the effects of each microRNA alone. Using a novel cell color-marking system, the authors found that only together can the three microRNAs permanently increase stem cell proliferation and protect leukemia cells from death. “The protection of leukemia cells by these three microRNAs gives them a growth advantage compared to normal cells, and so the leukemia suppresses normal blood function,” explains Dr. Klusmann.

The researchers published their findings in the scientific journal Genes & Development. Their work was supported by the Deutsche Forschungsgemeinschaft (DFG): Starting in November 2011, Dr. Klusmann received 1.2 million Euros over five years as a part of the prestigious Emmy-Noether funding program.