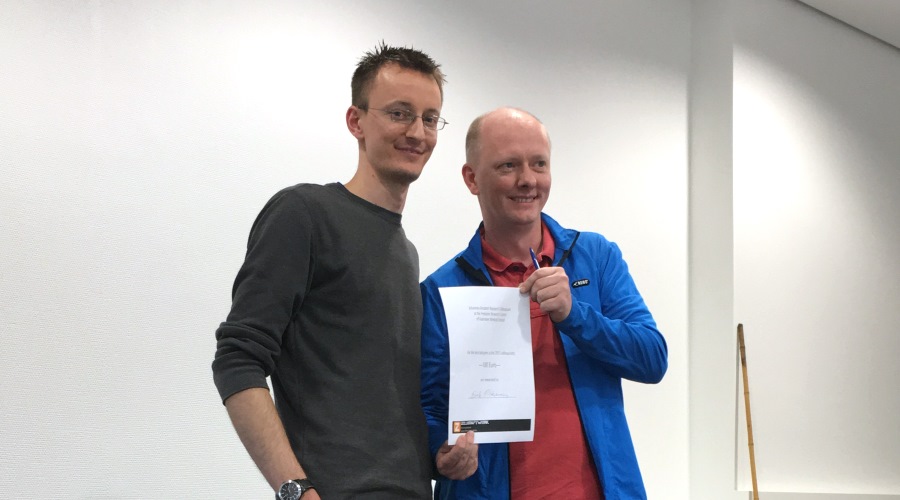 At this year’s Johannes Brodehl Symposium of the Pediatric Research Center, the “Zellkraftwerk Nachwuchsforscherpreis” (Prize for Young Scientists) was awarded for the first time to Erik Pittermann. Consisting of 100 Euros, the prize honors Erik’s promising research work as a student in the Regenerative Sciences PhD program at the Hannover Medical School, and as a doctoral candidate from the Research Group Pediatric Hematology and Oncology.

The prize was awarded for the best scientific presentation during this interdisciplinary symposium. “We need to create incentives for young, promising scientists and, at the same time, praise their research efforts. This is the only way to strengthen the innovation spirit in pediatric research that ultimately benefits our small patients,” says Christian Hennig, founder of the startup company Zellkraftwerk GmbH and member of the Pediatric Research Center at Hannover Medical School.

Erik is working on a model that allows us to study the causes of serious genetic childhood diseases, which were previously inaccessible to research. He uses special stem cells, which can be engineered from the skin cells of patients. These so-called induced pluripotent stem cells (iPSCs) have unlimited multiplication potential and can be steered to form any cell of the human body in a petri dish. In his work, Erik focuses on congenital neutropenia (Kostmann’s disease), a rare inherited disorder of white blood cell formation. He has found that iPSCs from patients with Kostmann’s disease show impaired production of white blood cells in vitro. Thus, the disease can be modeled in the test tube, for example for testing therapeutic ideas. In addition, Erik has succeeded in repairing the causative genetic mutation via CRISPR-Cas9 genome editing, after which proper white blood cell formation was restored. Direct repair of genetic defects now enables precise studies on the disease pattern. These findings could also lead up to correction of the disease-causing pattern in Kostmann’s disease patients in the future.